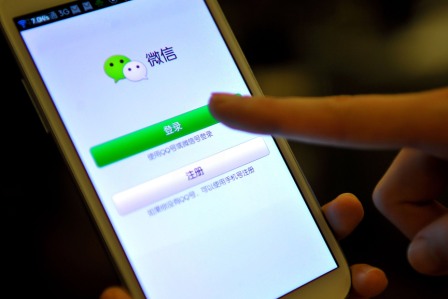 Lu Jiuping starts working at 4 a.m. every day, but the retired 50-year-old businessman has never made a cent from his current occupation.

He starts his day by reading several financial websites, picking out valuable bits of business or IT news.

Not satisfied to digest the information alone, he posts these news items in “Tearoom 90,” an official account he registered on WeChat, a popular mobile social networking platform developed by Chinese IT giant Tencent.

Since it was set up in February, Lu’s free subscriber service has attracted a readership of over 14,000, quickly turning it from a “tearoom” to a “newsroom,” much to the delight of the amateur media strategist.

“I am working as the chief editor of an e-magazine,” Lu said.

The Official Account is one built-in WeChat function that offers broadcast messaging. Operators of each account can share anything in any format with their subscribers and receive instant feedback.]According to Tencent’s website, the platform was originally created for big brands, such as airlines and banks, and celebrities, but it has unexpectedly struck a chord with ordinary people and citizen reporters, like Lu, who are taking advantage of the platform to develop specialized storytelling styles.

In the past few years, Sina Weibo, China’s most popular Twitter-like service, has exploded in popularity. Millions of Weibo users use the service to speak their mind.

Platforms such as Sina Weibo and WeChat are changing the way media works, with netizens now discovering and discussing social events online.

However, spam and misinformation have grabbed onto the coattails of the service, and people are getting tired of irrelevant or boring microblogs that pop up on their screens all day.

At the China Internet Conference in Beijing in August, a visitor scanned the QR code with WeChat, a messaging App on the cellphone, to buy biscuits on a smart vending machine. By Shi Yangkun / Xinhua News Agency

Lv Xin, dean of the New Media Department of Animation and Digital Arts School of Communication University of China, described this as the “parabola” of social media development.

He said that the rise of microblogging inspired ordinary people from all walks of life to voice their opinions on social issues, breaking down traditional media’s long-held domination over the spread of information and speeding up information transmission.

As they become increasingly immersed in social media, however, users find that it gets “boring” to sift through massive amounts of irrelevant information to find news that interests them. Instead, they prefer to spend their time perusing concise and well-organized information delivered to them directly.

“The parabola has reached its peak, and it will go down,” said Lv,  “but people’s demand for social media will go up.”

The professor attributed the popularity of WeChat to the platform’s ability to push content that meets public demand.

“In the social media age, no dish suits all tastes. People need more information to serve their personal interests. The Official Account on WeChat provides a venue for both institutions and individuals to publish their personal information,” one blogger wrote.

He describes his “Tearoom 90” as a professional business magazine. “My target customers are industry insiders, and those gossip girls or boys have little interest in following.”

The customized information helps to attract people with shared interests to subscribe, but subscriber-only content, which only subscribers can read or comment on, could be used to broadcast false information.

“If you want to see hard news, I believe that information published by authoritative media is the preferred choice, because they are more credible,” Zhang said.

Indeed, traditional media does not need to stop reporting on a broad spectrum and narrow down their scope to expand their audience.

Many national newspapers, magazines and websites have also landed in the platform.

Government departments have also opened accounts for hearing opinions from the public. According to a report released in May by Tsinghua University, the number of government accounts on WeChat has reached 1,000 across China.

This had led Zhang to worry that the WeChat official account mania may also result in an information overload, which would leave customers disappointed, much like the microblog sphere has.

In the latest version of WeChat, Tencent has organized official accounts into one compressed icon, rather than leaving them as separate icons that could fill an entire screen.  (Deng Zhonghao and Zhai Yongguan also contributed to the report.)