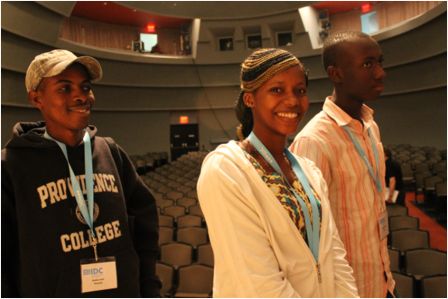 Hamidu Jalloh, Susan Conteh, and Mohamed Harding – who have pioneered innovations in weaving, robotics, and helicopter engineering, respectively, in Sierra Leone – joined Global Minimum in New York and California for a week of learning and crosscultural exchange. Based on their participation in innovation challenges through “Innovate Salone” the young people were invited to two well-respected conferences (Science Foo Camp, and Interaction Design and Children) to engage with other makers, present their inventions, and learn how to translate those ideas and products into solutions for their communities.

Science Foo Camp (Google Campus, Mountain View, CA) Through a Digital Science scholarship, Hamidu, Susan and Mohamed were invited to participate in the 2013 Science Foo Camp (or “Sci Foo”), a unique, invitation-only gathering organized by Digital Science, O’Reilly Media, and Google, with support from Nature. At Sci Foo, the three youngsters rubbed shoulders with the founders of Google, participated in “unconferences” related to space exploration and demo’ed their inventions to other participants. This was a unique opportunity for these young inventors who themselves are building unique solutions relevant to their communities, to help shape the future of scientific inventions and research globally.

Interaction Design for Children Conference (The New School, New York, NY) David Sengeh, President of Global Minimum, delivered the opening keynote address for the 2013 Interaction Design and Children (IDC) conference presented by the New School and Sesame Workshop. As part of this address, Hamidu, Susan and Mohamed were invited to talk about their specific inventions, and their learning and maker processes. Hamidu described the challenges he faced in his community as a maker while Mohamed narrated his experience using MIT’s OpenCourseWare as a tool for learning. Susan was motivated to develop new dye material for batik production and fabric design because of her desire to promote the culture of Sierra Leone.

Maker Camp 2013 Young Makers Hangout (Worldwide) For the second year running, Innovate Salone has now partnered with Make and Google by nominating students to participate in their annual Summer Maker Camp on Google Hangout. This year, finalists from the Innovate Salone 2013 competition, from Prince of Wales Secondary School and Annie Walsh Memorial School in Freetown, participated in the Maker Camp 2013 – Young Makers Hangout. They were joined by young makers from all over the world as they showed o! a windmill project and an electric hoist system for getting water from wells

Made possible through the assistance of our partners: US Embassy Freetown, Digital Science, Google, Make Magazine, The New School, and Sesame Workshop.